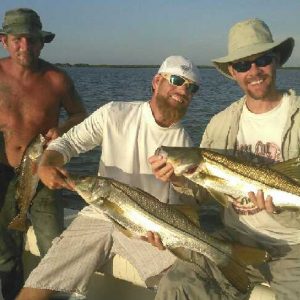 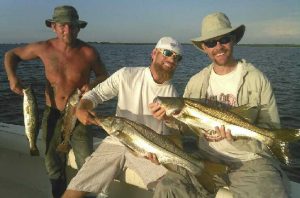 flats and the near shore flats, the Snook, Red fish and spotted Sea Trout are in migration mode, traveling and following the massive schools of the new returning live bait (pilchards) schools. All species have the feed bag on these little easy to dine on acre size (in some cases) bait pods, they just go crashing through them with there mouths open, this annual feed fest goes on until the pilchards thin out and go south for the winter around December. The pilchards are full of protein and the gamefish know this will help them get through a lean and cool winter. October is my favorite 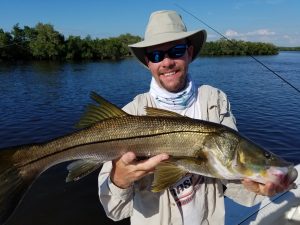 month of the year due to this phenomena, all on light spinning gear spooled with 8-15 lb. Spider Wire Ultra Cast braided microfiber, which allows us to stay off the pod’s of fish with long casts ! October is also the month the breeder size red-fish invade the shallow flats from offshore to spawn, these big bruisers with 4x wheel drive, after inhaling a bait leave a trail of boils as they make the light tackle elongated spooled fishing reels sing, fish can be from 27″ 9lb. to 40″ 20lb. This is also the time the Gator Trout (big trout) return to the skinny water also chasing the influx of bait while following the cooler water of fall o 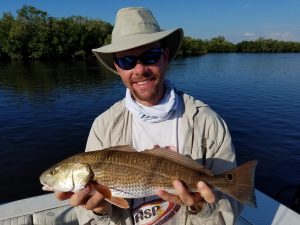 n the pristine flats with water turning gin clear. Snook fishing is also phenominal as these magnificent fish make a mad dash for estuaries and rivers in our west central Florida’s gulf coast region where they can sustain life by staying warm enough to avoid deadly hypothermia, eating every pilchard that comes in their sight and feeling through their distinctive black lateral lin 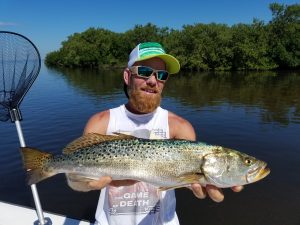