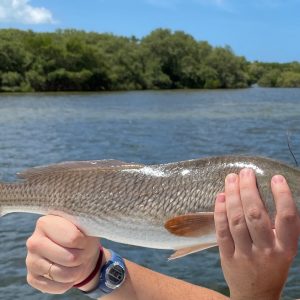 Anglers have been releasing huge amounts of different species on each outing, tackle destroying Inshore beasts are becoming more regular. The Gator Spotted Sea Trout are right at the top of our local fishing menu, fish that peel line off as they are heading into the oyster-crusted mangrove root systems along shorelines.

Snook are notorious for crushing anglers’ dreams by cutting off the strong fleurocarbon leader with their sharp gill plates. When you steer them correcty, though, it is incredibly rewarding to feel and hold all that power in your hands.

Redfish have been in larger numbers and a few flats charter fisherman have been able to catch trophy-sized fish of over 12lb. These larger Redfish give anglers multiple powerful runs and are a blast to catch on live bait. Tarpon, Mangrove Snapper, Jack Crevalle and Bonita are just a few of the species that anglers have been hooking into as well. Offshore, the Red Snapper have been around in big schools while fishing on inshore ledges and reefs. Anglers have been loving fighting them on the lighter spinning gear. Gag Grouper are Ready to be harvested as we enter June.