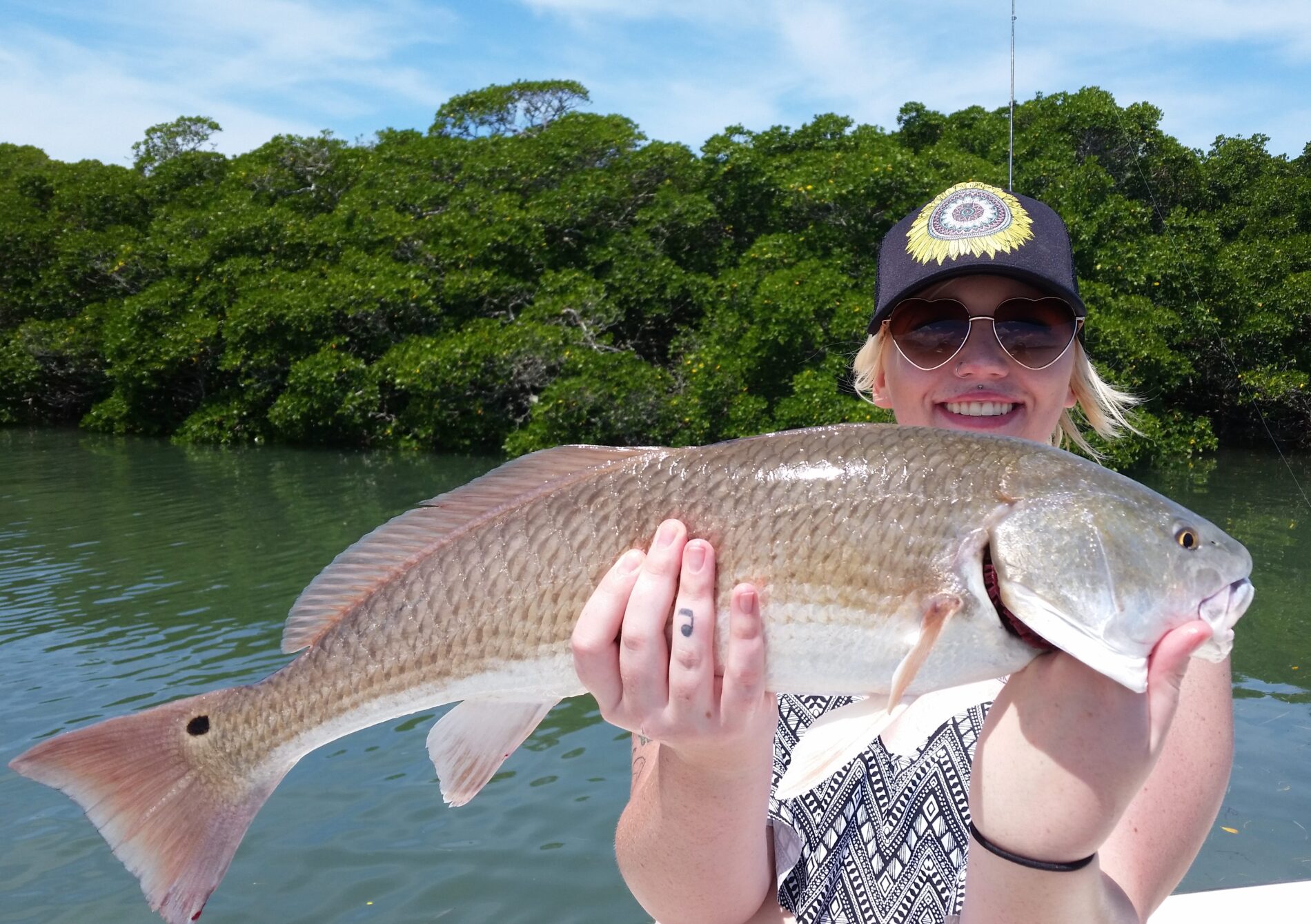 Florida Redfish have 4-wheel drive, reel screaming power from the start of the fight to the finish, all in shallow water, ankle to knee-deep water.  To Gulf coast Florida Redfish anglers, the good old days are upon us again thanks to conservation groups and fishery management, several years of completely closed seasons, strict harvest regulations (one fish per angler per day 18” to 27” slot) that extend to the present.  These regulated size fish weigh 5 to 15 pounds and larger, over 27” fish that must be released, but what great sportfishing fish to 40”: 20-25 lb. on light tackle.

Many and almost all shallow water trolling flats of West Central Florida (Clearwater, Tampa Bay, New Port Richey, Palm Harbor, Tarpon Springs, St. Petersburg, Port Richey, Spring Hill and Brooksville) are boiling with schools of sizable reds not seen in years.  Although many thought the rules too tight when they first went into place, sport fishermen throughout the state are enjoying the result today in catches that sometimes reach 30 or more fish daily, and most of the fish are being found in shallow water where sight fishing with light tackle and fly rods is possible.

Sight fishing has become the norm for Redfish fishing with poling platforms on your skiff and electric trolling run slow and quiet.  The hunt is on when you know the tides and the fish’s habits on how and when they move onto a particular flat and start covering water.  Polarized glasses are a must in order to look through the water for tell tale signs such as a tail waving slowly on the surface, a flash or two in the sun of rolling fish, a push of water, nervous water, a fish crossing a pothole (sand hole in grass), or showering bait fish.

Sometimes and some days it makes better sense to just go from one of the hangouts to another using a stealthy approach, anchor out and fish being as quiet as possible.  Structure such as oyster bars, rock piles, a deeper depression on the flat, saw grass, docks and mangrove shorelines with overhanging branches, or shell points are such hangouts.  These tactics usually score and you’ll know if they are there shortly…wait for them or move is the big question.  Remember that Redfish are foragers and it’s in their nature to move in search of food.  When you do find a mother lode, it’s non-stop rod bending, reel screaming action.  It’s a regular Chinese fire drill with some bites lasting hours.  Redfish are caught on a number of artificial baits such as plugs, spoons, jigs, jerkbaits and live baits such as shrimp, pinfish, pilchards, and creek chubs and cut baits. Red fishing year round on the Florida Gulf Coast is growing as rapidly as the populations. 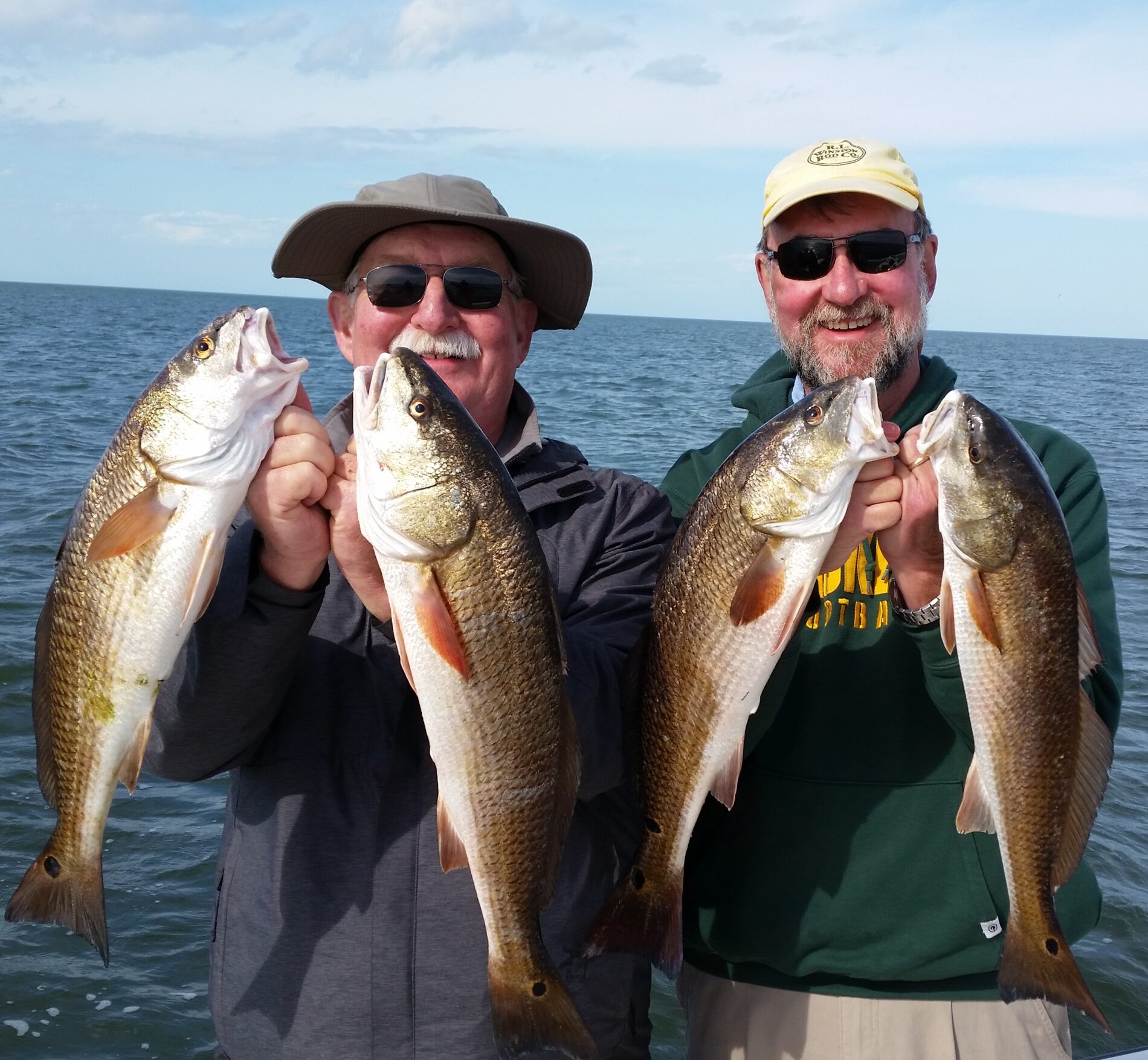 There is simply no substitute for time on the water when it comes to knowing how to catch redfish.  That’s why redfish guides, who spend 200 to 300 days on the water, searching for one of our favorite fish, are such an invaluable resource.  They have knowledge it would take years for the average angler to gain on Florida flats fishing.  Florida inshore flats require stealthy approaches to and on a flat and are definitely key to your success, either poling your skiff from the platform or slowly engaging your electric trolling motor and maybe drifting through an area is the way to catch these spooky gamesters as they are normally found in knee deep water or less.  Look for baitfish, scan the flat for showering baitfish, which sometimes have terns or gulls hovering over them also looking for a meal.  If the water is a little bit deeper, you look for nervous water.  A lot of potholes are very good areas in 2 to 3 feet of water with nice, turtle grass, eelgrass surrounding them.  Knowledge of Florida Flats Fishing requires patience, also a factor, slowing everything down as all flats work a certain way.  Most often water drains on and off a flat a certain way.  Usually there’s a little depression, channels or potholes along these redfish highways that redfish, snook and trout us to move up and onto a flat at the first part of an incoming tide.

Regardless of where you are fishing, the number one thing I think you need to do is learn what the preferred food source is for the redfish, snook, or trout in that area at that particular time of year because it varies.  In some cases redfish, snook and trout might be chasing shrimp coming out of grass bars or big schools of mullet.  Either way that’s what you need to be around.  It might also be big schools of pilchards or small blue or stone crabs that are hunkered down in a mangrove root or small baitfish in a sand pothole.  You’ve got to identify what the preferred food is for the reds in that area for that time of year and you need to put yourself in those areas because the fish are going to be where the food is.

The Redfish or Red Drum, also known as Channel Bass or just Reds, is a game fish that is found in the Atlantic Ocean from Massachusetts to Florida and in the Gulf of Mexico from Florida to Northern Mexico. It is the only species in the genus SCIAENOPS.

Redfish or Red Drum usually occurs along coastal waters. Three-year-old redfish typically weigh six to eight pounds. The largest one on record weighed just over 94 pounds. When they are large, they are called Bull Reds and most people do not find the large ones good to eat. Florida Redfish regulations permit one per person from 18 inches to 27 inches – Very Good Eating!

Mature Redfish or Red drum spawn in near shorelines. Juvenile redfish typically inhabit bays and coastal marshes until they reach maturity between 3 and 6 years of age. They will readily accept any bait but prefer pilchards, menhaden, shrimp, mud minnows, small crabs, and all cut baits, i.e. ladyfish, mullet and Spanish sardines. Red drum are relatives of the Black Drum and both make a croaking sound when in trouble.

*Prices are subject to change without notice.

Call Now to catch a memory!