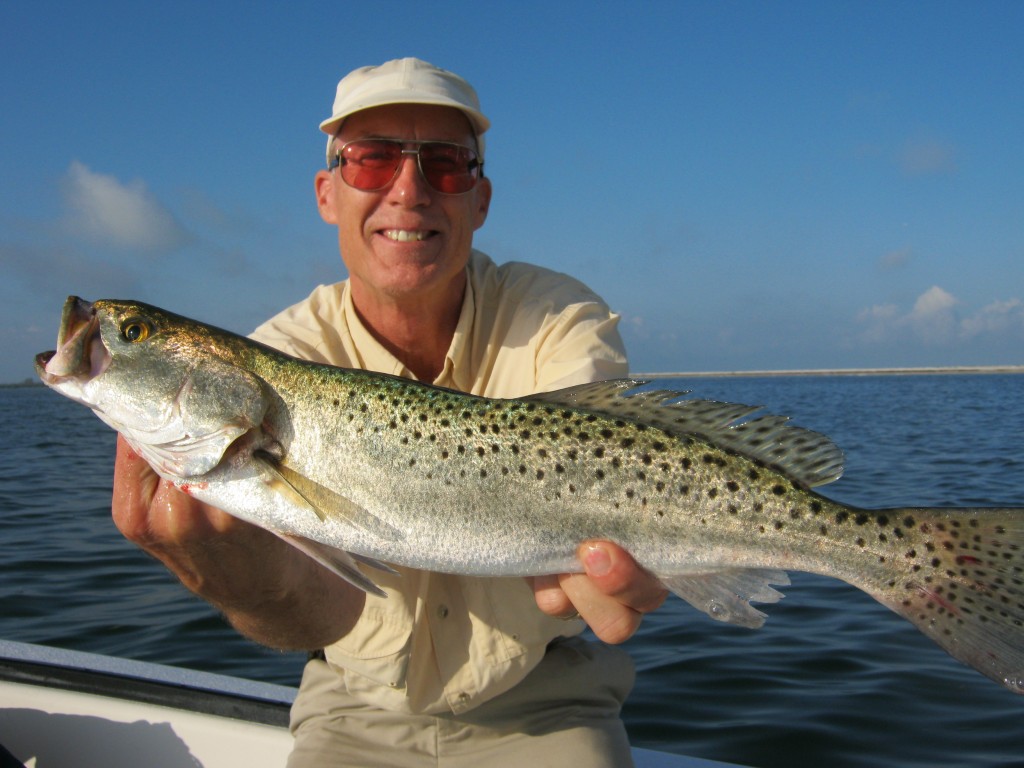 Spotted Sea Trout are the most popular of all saltwater fish throughout most of their range, as far north as New York and all the way down around the East coast to the West Coast of Florida and on to Texas.  This is the result both of their abundance and their cooperative nature.  Trout are the Pan fish of the sea, willing to grab bait or a lure usually not too difficult to find, and wonderful in the pan…..yet they display an aggressive nature and a willingness to wallop topwater plugs to jigs that mark them as a true game fish.

Trout are found in protected inshore waters that can be reached in small boats such as dingys, kayaks, canoes, etc. on most days.  The fish are in water shallow enough that no boat is needed, i.e. a fish made for wade fishermen.  Hey also reach out into the Gulf of Mexico in certain times of the year and can be found on mostly clear grass flats from one foot to 8-10 feet with a spotty turtle grass and sand bottom.  Their most common nickname is SPECKS.

We regularly target the bigger of the species fish 20” to 30” and 4 to 10 pound class, all these luscious gator trout reside in a habitat that we have in our area of Clearwater, Tampa, Palm Harbor, Tarpon Springs, St. Petersburg, New Port Richey, Port Richey, Spring Hill, Brooksville and all of Pasco and Pinellas Counties.

The big trout is a different animal from the smaller fish.  His mouth turns bright yellow-orange, the shoulders real wide and broaden.  His food and habits change, which makes them a great challenge for anyone saltwater trout fishing.  Big trout eat mostly fish, some attack lures as big as they are.  A big Trout can be a formidable opponent in skinny water with plenty of muscle to make your gear sing and often some explosive, snook-like jumps to top things off!

Finding the large spotted trout depends on time of the year and availability of the preferred baitfish (pilchards), although I’ve 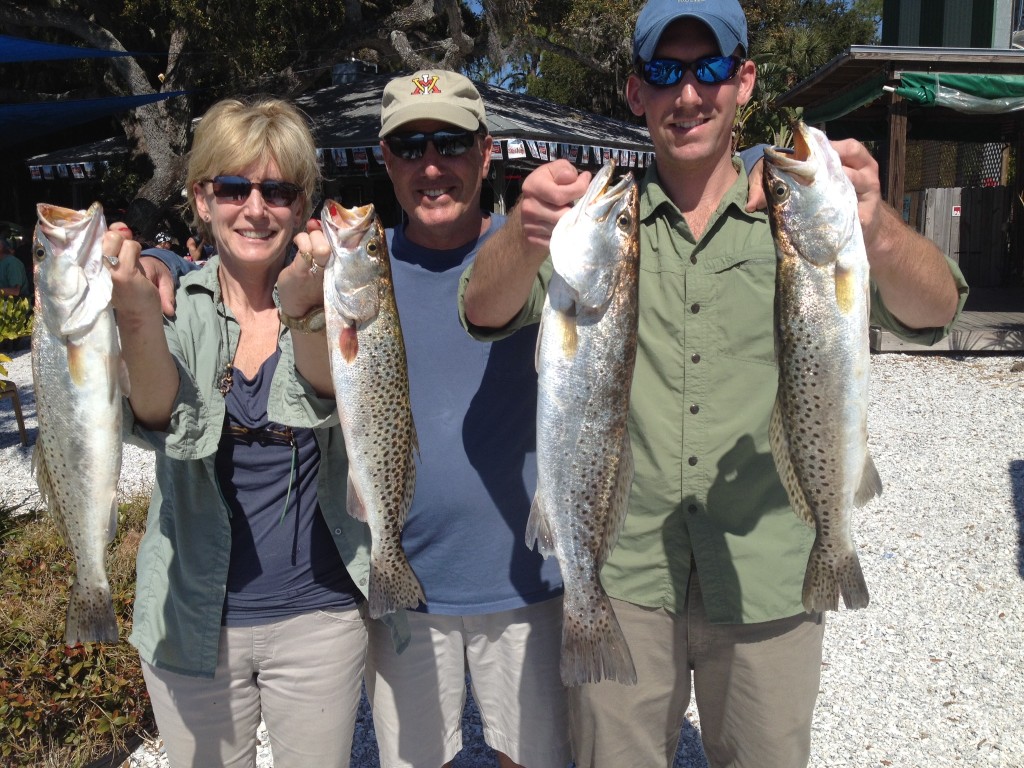 caught plenty on pinfish and finger mullet.  Having two good size rivers and numerous estuary systems in our general area is a plus.  Big topwater plugs are a blast when working a shallow flat; these fish leave a bathtub size hole in the water on strikes.  Normally where you find one gator Trout (Really big trout) there are more in the general vicinity.  Trout take a good number of artificial and live baits and are not as finicky as most other flats species.  Some half to full day charters have caught as many as 50 fish and left with a respect for the trout and a Memory.

Spotted sea trout are also called specks, spotted weakfish, spotted squeteague, and most commonly, just plain “trout.”  Whatever you call them, they are the most popular of all saltwater gamefish throughout most of their range.  This is the result both of their abundance and their cooperative nature. Spotted sea trout are the pan fish of the sea, always willing to grab a live bait or a lure, usually not difficult to find and wonderful in the pan.

Spotted sea trout fishing is, for the most part, found in protected inshore waters that can be reached in the smallest of boats on most days and in water so shallow that on boat at all is needed many times.  Trout are a fish made for the wade fisherman, dock fisherman and bridge patrol and their home waters are often the clear, shallow grass flats.  They are also found at times in the surf swash channels right next to the beach out to the first sandbar on Florida’s Gulf Coast.

Turtle grass dotted with sand potholes has a special appeal to trout; perhaps because of its depth and considerable escape cover it offers, as well as being an attractant for shrimp, crabs and baitfish of all kinds. Trout are given to hiding when a predator (dolphin, mammal porpoise) approaches rather than taking off at high speed as pelagic species do, which is why their backs have evolved to the olive green, mottled pattern they wear.  When a trout settles down on bottom in a stand of turtle grass, it’s very hard to see them from overhead, even if you know exactly where to look.

Trout like other fish and shore bound wildlife, seem to prefer “edge” cover, the point at which one type of habitat meets another, such as grass points and sand as well as edges of flats where the grass meets sand on the drop off.  Probably this offers feeding variety, or perhaps it’s and easy geographic mark for the fish to home on, but in any case, if you find one of these cover breaks, work it carefully.  Deep holes on a flat that have small winding swash channels leading to them are also likely hangouts.

When drifting to locate a school of trout, a trolling motor can help maintain the drift that puts you on trout.  When drifting an open bay, avoid using your outboard because it’s noise can end a bit in a hurry.

The spotted sea trout, Cynoscion nebulosus, is a common estuary fish found in the southern United States. While most of these fish are caught on shallow, grassy flats, spotted sea trout reside in virtually any inshore waters from the surf of outside Florida’s west coast barrier islands to far up coastal rivers, where they often come for shelter during cold weather fronts.  Contrary to its name, the spotted sea trout is not a member of the trout family (salmonidae) but the drum family (Sciaenidae).

These fish have large, prominent canine teeth (fangs); dark back from olive green to almost black, with grey or silvery sides marked with scattered oscillated black spots of varying size.  Plain black spots are also present on the dorsal and tailfins.

The average size is 2 pounds, but in most areas fish up to 5 pounds are fairly common and then there are your lunker trout 6 to 10 pounds and 31”.  The world record is 17 lbs. 7 oz.  All spotted sea trout are active as long as you have moving water, i.e. tides incoming or outgoing.

Like all members of the drum family, mature males produce a “drumming” sound to attract females during the spawning season early spring through summer.  The spotted sea trout makes for excellent table fare with a firm white meat.  Brining filets in iced salt water for 20 to 30 minutes is recommended.  This fish is closely related to the weakfish.  Trout is available for year round fishing! Contact us today to book your trip! 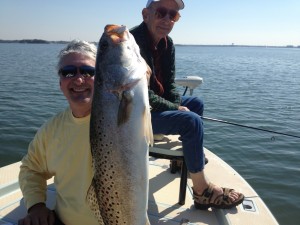 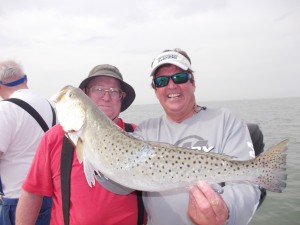 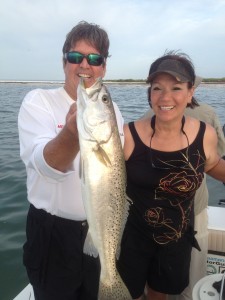 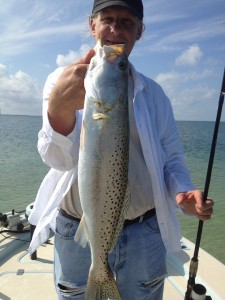 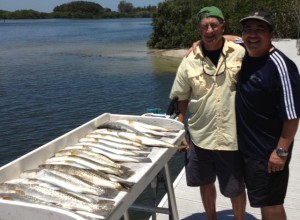 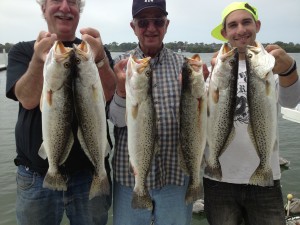