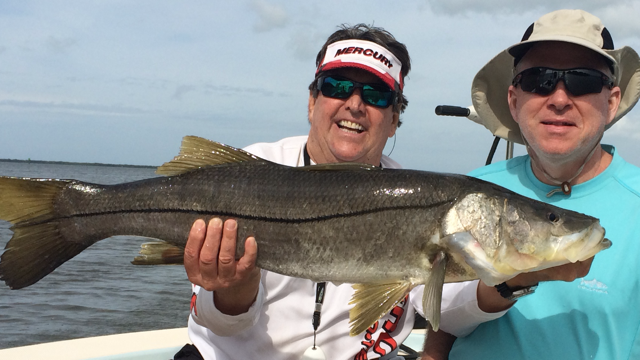 There’s nothing common about the common snook (Centropomus Undecimalis).  Snook fishing is a backcountry street fight with an educated adversary that seems to know exactly what you’re thinking.  Snook are among the most difficult of all fish to land, not only because of their great speed and power, runs like tuna, gill rattling jumps and thrashing vicious head shakes, but also because they are caught in small creeks, residential canals lined with docks & barnacle encrusted pilings, rock piles of all sizes, bridges, piers, back- country long mangrove shorelines with razor sharp roots, line cutting gill plates and a mouth like a concrete wall. Snook, more than any other species are completely aware that there is safety in that structure.  Their first move when they feel the hook is to run into and the closest structure as far back as they can get, then go either over, under around or through until they break free, but they sometimes can be stopped or steered away with the right snook fishing instruction.  Down and dirty techniques incorporated with using all the strength of the graphite rod has your whole body bending that rod horizontally to the water getting back whatever slack you can when you stop him or turn him and going through that all over again from the left to right side until you have worked the fish out and away from whatever structure, then using finesse to bring him boat side where it begins all over again. THAT’S SNOOK FISHING on light tackle, line and leader.  Every angler has his or her own unique tricks and stores of know-how to trick the snook beginning with what live baits and artificial lures work best when, where, time of year, water temperature, barometric pressure, tides and more.  Snook fishing is very different from the east coast to the west coast of Florida. Snook fishing is the ultimate light tackle experience.  The good average snook in our area on the Gulf Coast of Florida are from 2 pounds to 30 pounds with more slot range fish than others’ averaging 6-20 lbs. 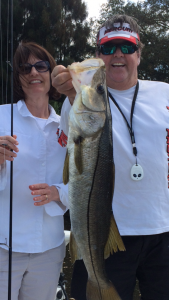 Snook fishing on the Florida Gulf coast is one of the only and best places in the United States to do battle with the awesome snook.  The Snook fishing line in Florida is almost like drawing a direct line across the state from Daytona to Crystal River (Northern range).  This is due to the temperature sensitivity of Snook nature and metabolism.  When water temperatures fall below 55 degrees they tend to float on the surface of their winter habitat barely hanging on.  Very temperature sensitive and if lower temperatures are sustained for a period of time it will normally kill the great Snook gamefish.  Fortunately in our area – Clearwater, St. Petersburg, Tarpon Springs, Palm Harbor, New Port Richey, Port Richey Spring Hill, Brooksville and Tampa Bay – this is very rare due to the many winter habitats that Snook migrate to from fall to dead cold winter.  Power plants, fresh water springs, deep rivers and deep dark bottomed canals that hold heat provide safe refuge for these fiery fish.  Capt. John has won numerous snook fishing tournaments in the area and is one of the most recognized guides in West Central Florida Gulf coast.  Snook fishing is found from the upper reaches of the rivers, bayous, creeks, inshore bays, residential canals lined with docks to dump banks, spoil islands, passes and beaches.

Show me a good, well known snook fisherman and I’ll show you someone who reads the tide tables and solar lunar time periods.  He may forget his or his wife’s birthdays but he won’t forget the date of the spring tides beginning in March and rolling through all the months until the end of November.  No fish are more reactive to tidal flows than snook.  They depend on moving water to ambush their food sources.  When the tide isn’t moving, they rarely chew.

But there’s a lot to learn besides what time of day high and low tides come into your fishing area.  The basics on your tide table tell you how long a tide is and the height of the tide caused by low ocean or Florida Gulf coast waves caused by the pull of the moon and sun.  They are not as noticeable at sea or in deep offshore water, but when they hit land, the motion of the waves causes the water to rise and fall and creates tidal currents as the water flows over shallows and through narrow passages.  Anyone who spends enough time around the coastal areas knows this.  But the flow varies dramatically based on the shape of the land it meets.  Tide heights are listed in feet and inches above and below the mean low water mark.  At any location, be it a couple of miles, these numbers and times change.  The greater the variations from MLW (mean low water) that is the taller the wave and stronger, faster moving water usually the better the fishing.  Wind direction and speed also play a big factor in the wave on the MLW mark heights and lows of these tables.

One of the first things I look for when seeking out snook is glass minnows, even if you are going to use migratory baitfish such as pilchards, white bait, scaled sardines or thread herring.  The presence of large schools of glass minnows in a river, bay or estuary system also means snook are there as well. Unfortunately glass minnows won’t fit on a hook. 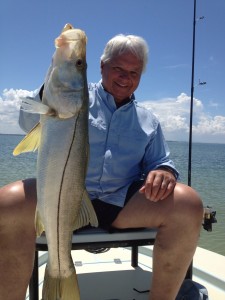 Snook lay flat on the bottom in good numbers when sleeping. Suspended fish in the water column are usually active and hungry and these snook of early spring through fall must meet their needs for energy and gorge themselves on the migratory baitfish and will feed around the clock.  So leaving sleeping fish also means returning later and trying them again.  We often try live chumming the area to draw a strike or two, using the solunar times minor or major time frame is a good time to live chum.  Snook fishing guides don’t over chum, but sprinkle a handful of baits from time to time to draw a response.

Catching these baits also involves the use of solunar tables.  Catching bait, in the form of pilchards or live-scaled sardines, is often the hardest part of serious snook fishing.  Early in the morning, cooler water temperatures often mean white bait will not chum.  Snook fishing pros often have to rodeo their baitfish, which means moving back and forth across a flat or beach and watching for diving birds, pelicans and terns being the most helpful.

Wind direction probably affects snook fishing more than any other fish.  Wind affects all fish on a flat because of how it changes a tidal movement.  North winds hold out your tides and flow, whereas anything south, southeast, southwest winds tend to push the tide up, hold it longer and make for a longer steady tide.  The four tide days in our area on the stronger moons, 3 days before to 3 days after are by far the best times to fish for any gamester.  Four tide days are better because they give the snook fishing angler more opportunities to get in on the bite.

Biologists have discovered that nearly all snook over 20 inches long are female.  They believe the males reverse sex as they age.  It takes a snook about 5 to 6 years to reach the minimum legal length on Florida’s west coast.  It takes an added 5 to 9 years for a 28-inch legal fish to reach the 40-inch length that identifies a real trophy for the most avid snook fisherman.  Florida west coast female snook grow two to four inches per year after reaching the minimum 28-inch legal size.  Warm weather and plenty of bait produces maximum growth, while cold winters and poor feed caused by pollution or red tide can cut the growth in half.  Total age for a 40 incher is likely to be between 9 and 17 years.

The common snook (Centropomus Undecimalis) is a species of marine fish in the family Centropomidae of the order Perciformes.  This species is native to the coastal waters of the western Atlantic Ocean and Caribbean Sea, from southern Florida and Texas to Rio de Janeiro in Brazil to east coast Central America.

One of the largest snook, C. Undecimalis grows to a maximum overall length of 4’ 7” and a maximum recorded weight of 54 lbs.  Of typical 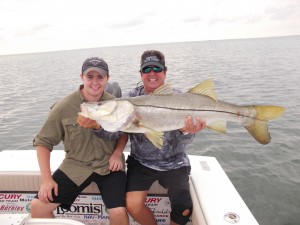 Centropomidae form, it possesses unremarkable coloration except for a distinctive black lateral line.  It may also possess bright yellow pelvic and caudal fins especially during spawn.

Occurring in shallow coastal waters (up to 50’ in depth), estuaries, bays and lagoons, the fish often enters fresh water up coastal rivers.  It is carnivorous, with a diet dominated by smaller fishes and crustaceans such as shrimp and crabs.  Considered an excellent food fish, the common snook is fished commercially outside of U.S. waters and raised aquaculture although it is not available for sale in the U.S.  It is a prized game fish with a remarkable attitude.

The common snook is also known as the Sargeant fish or Robalo.  It was originally assigned to the sciaenid genus sciaena; sciaena undecimradiatus and Centropomus undecimradiatus are obsolete synonyms for the species. Click here to view our FAQ page with general information about our fishing charters. 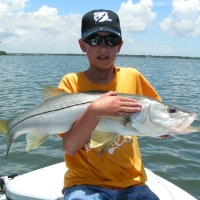 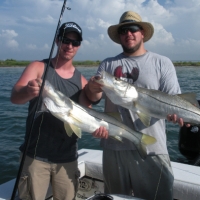 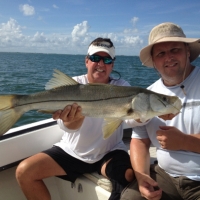 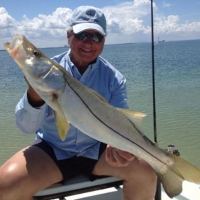 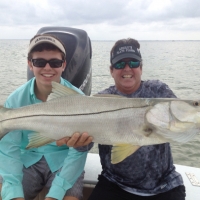 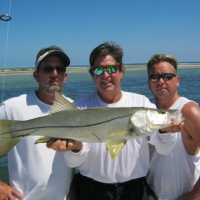 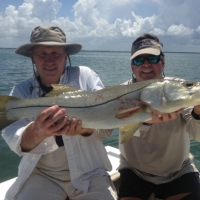 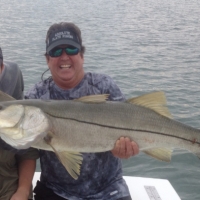 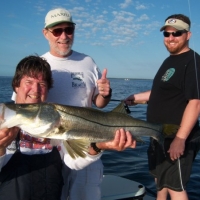 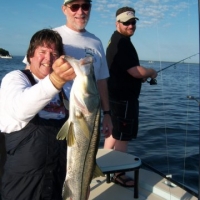 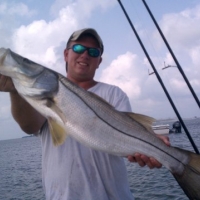 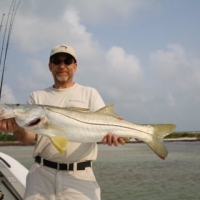 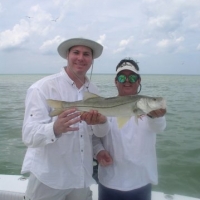 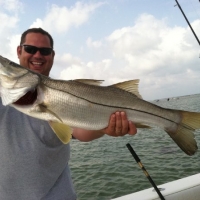 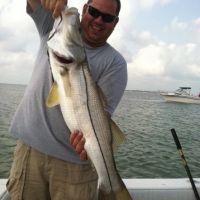 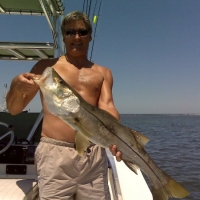 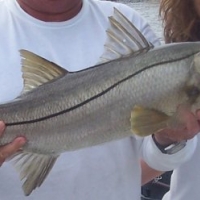 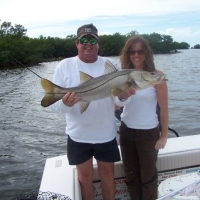