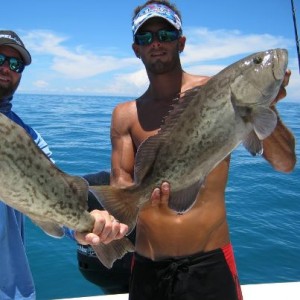 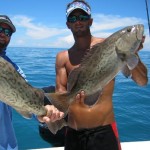 SEPTEMBER FISHING REPORT School has started; fall is coming next month, the end of another summer here on the West Central Florida Gulf Coast.  The beginning of the slower tourist season, NCAA football season, hunting season, means less boat traffic, less angling pressure and cooling water temperatures, and I am looking forward to the autumn fishing pattern to start. This last month has been challenging at times, August heat along with the cloudy water brought on by heavy rain early in the summer, but we have had many great Nearshore reef and wreck fishing ½ day 5-6hr. trips are catching over 50 fish with up to 4 deep sea fishing anglers aboard, Gag grouper, Grey Snapper, Spanish mackerel, Big Drag screaming Bonito and a nice cobia now and again either bottom fishing or slow trolling or anchoring and chumming.  Snook, Redfish & Sea trout fishing charters on the grass flats, slough holes, & flats edges, docks and just about any inshore fishing structure with live bait (Pilchards), during this cloudy water pattern have been producing keeper size fish with some numbers starting to be the norm.  Another Species that will be on hand is the sought after highly prized Snook, with the keeper season closed for one more fall season here, the release fishing should be very-good, it was a toss-up as to whether or not to close the season, I’m glad they chose the extra year for the fisheries future, the summer was great with many Trophy Snook being caught.  There will be opportunities for small juvenile Tarpon at times this fall, it co-insides with Mother Nature and the feeding tides, we know what they want, food wise! 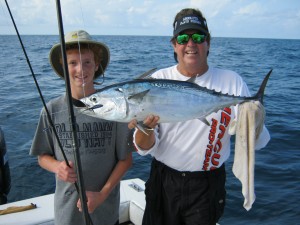